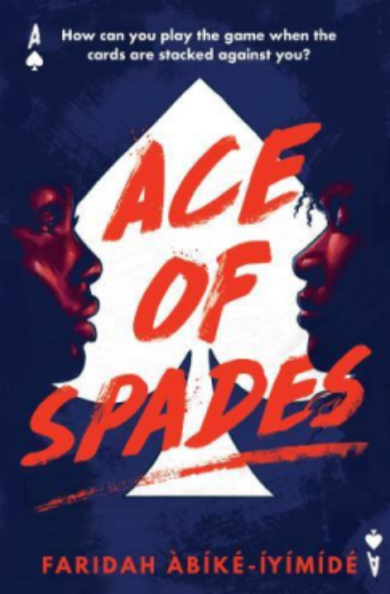 A deep dive into  institutionalised racism 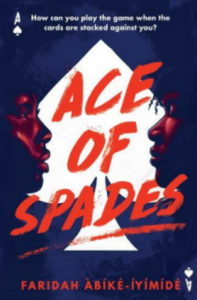 Where money paves the hallways, and the students are never less than perfect. Until now.  Because anonymous texter, the Aces is bringing two students’ dark secrets to light.

Talented musician Devon buries himself in rehearsals, but he can’t escape the spotlight  when his private photos go public.

Head girl Chiamaka isn’t afraid to get what she wants, but soon everyone will know the  price she has paid for power.

Someone is out to get them both. Someone who holds all the Aces. And they’re planning  much more than a high-school game…..

The horrors of Institutionalised racism

Though this book carries and talks about many different themes and problems, e.g  the toxicity of homophobia and betrayal, racism is the overriding problem that takes  the story’s beginning, middle and end on a leash.

Institutionalised racism is defined as: Discrimination or unequal treatment on the  basis of membership of a particular ethnic group( typically one that is a minority or  marginalized), arising from systems, structures, or expectations that have become  established within an institution or organization.

The book uses this premise by knitting it between the well written story that hooks  the reader in immediately. Some would say that the book is “overdramatic” and is  bloated up to create a more effective horror novel, but it is still a problem in todays  society, especially in the western world such as the U.S and the UK. This is in our  every day lives like education, housing, the work environment, the criminal justice  system and sadly many more institutions.

The main plot consists of two black kids who got accepted into a very demanding  high school. The story is set up with Devon talking about how he despises assembles  and how they are a waste of time when he gets announced to have won a senior  prefect. Devon is confused that he had even won an award setting up part of his  character as a person who is not someone who usually does well or as someone  practically popular. Throughout the book, it makes sure to point out that Devon and  Chiamaka are the only two black students in the entire school. This makes the reader  quickly pick up on this fact and what makes the reader second guess Niveus  Academy.

Chiamaka is almost the polar opposite of Devon. “Popular” and “well liked”, she  worked her way up the social ladder and will not let anything get her down. She  thinks she knows everyone inside out and is shown to be somewhat confident in the  school atmosphere. So when this anonymous being starts blackmailing them they  both act in different ways and it makes a nice contrast when the two finally decide to  team up and stop whoever the Aces is.

Their first secrets that are revealed are also very different. Chiamaka secret is  actually a set up by Jamie, a boy who Chiamaka thought was close to her, when  visiting a sweet shop. Devon’s secret is the fact that he is in the LGBTQ+ community  and dated one of the popular guys in secret. Both characters try and justify why  someone is spreading their secrets but keep dodging the fact that it could be a racist  attack because that would be the worst case scenario and everyone has been nice to  them so far but little did they know it was a set up from the beginning. A scheme to  take them to the top and make them crumble.

This book is so great at social commentary with so many themes and ideas being  displayed well. It also has good plot twists that make sense to the plot, not coming  out of nowhere or made purely just to scare the reader. The fact that the whole  school was behind the attack and even people outside of the school were involved  brings up the chilling reality of who really is a traitor and who isn’t.