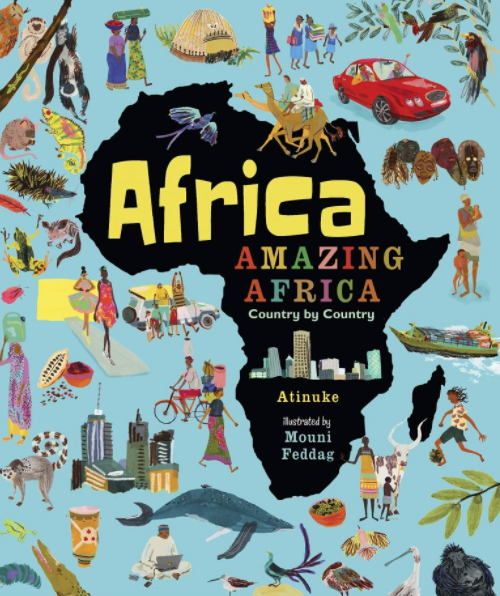 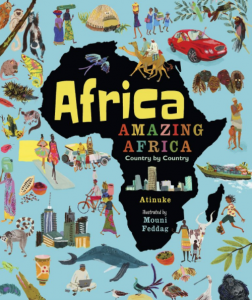 I chose this book because I’ve always wanted to learn about Africa, and this book provided a way of learning in a colourful and fun way. Africa is the most diverse and gigantic continent. It is as big as Europe, India, Japan, Mexico, USA altogether. It is diverse in culture, languages and history. It has at least 55 countries. The first university in the world was in Africa. Everyone on earth is originally from Africa, before they went on to populate the whole planet. That is so awesome!

This book has no characters, but it talked about the countries in Africa. They were divided into North Africa, Southern Africa, Central Africa, East Africa and West Africa, where I’m from! I will say some facts I find interesting about some of the countries in my review, but not all!

Setting of the story:

Africa is separated from Europe in the South by the Mediterranean Sea. It has lots of islands and deserts. It is very hot. It also has rainforests and diverse landscapes. Climate change is changing landscapes and habitats of both animals and humans. Africa is full of lots of incredible animals and more than one billion people. Ivory tusks from the elephants cause poachers to kill them for sale, and the elephants are now endangered. People from Africa used to be shipped to Europe and America and sold as slaves. There are lots of precious materials in Africa, like diamonds and crude oil. There is also lots of sunshine! Many Africans carry things on their heads mostly, because the neck muscle is stronger than the arms. Zambians can even do this running or while riding bikes.

The parts of the story:

Southern Africa consists of Angola, Botswana, Lesotho, Malawi, Mozambique, Namibia, South Africa, Swaziland, Zambia and Zimbabwe. Southern Africa has the oldest deserts in the world, with antelopes, elephants, lions and humans living together! Botswana has lots of millionaires and diamonds. I wish we were from Botswana. Lesotho is called kingdom in the sky because it is one of the highest countries in the world. Basketball is very popular in Angola, my second favourite sport after football! Swaziland king is extremely rich, even though most people in Swaziland are poor.

East Africa contains Sudan, Ethiopia, Kenya, Uganda, Eritrea, South Sudan, Somalia, Tanzania, Djibouti, Comoros, Madagascar, Rwanda, and Mauritius. Comoros is a group of four islands Eritrea’s war of independence lasted for 30years and more than a third of the army were women! European countries seized all of African countries in the 1880s, except Ethiopia! Coffee first came from Ethiopia. Madagascar is an island that broke off from Africa over 88million years ago into the Indian Ocean. South Sudan boys are given young bulls with their owners, and they grow up together! Seychelles is made up of 115 islands! Somalian refugees of war, famine and droughts live all over the world.

West Africa contains Burkina Faso, Ghana, Nigeria, Ivory Coast, Sierra-Leone, Guinea, Cabo Verde, Togo, Benin, Liberia, Mali, Niger, Senegal, Gambia and Guinea-Bissau. West Africans love music. The kingdom of Dahomey where Benin was once part of, was famous for its powerful soldiers. Women soldiers were considered the bravest and best, for example She-Dong-Hong-Beh was a commander when she was only a teenager. Caterpillars are a popular food on Burkina Faso. The islands of Cabo Verde are disappearing because of rising see levels around the world. Côte d’Ivoire, also called Ivory Coast got its name from the huge ivory tusks of its elephants. There are lots of beautiful birds in Gambia. Some even communicate with humans, like the honeyguides! Ghana has the largest market in west Africa, called the Kejetia. Liberia is a country started by a group of people that returned from slavery, it means land of freedom. Nigeria’s film industry is the third largest in the world, called Nollywood. Nigeria has the largest population and economy in Africa, 1 in 4 Africans is a Nigerian! Sevigne Mactar Ba is a Senegalese inventor, most famous for inventing an advanced weapons rocket. Sierra Leone is one of the top producers of diamond, but it is not a good idea to buy from there, because children are forced into labour by soldiers.

Central Africa consists of Burundi, Cameroon, Central African Republic, Chad, Gabon, Equatorial Guinean, Republic of the Congo, and São Tomé and Príncipe. Central Africa has the second biggest rainforest of the world. Chadians have up to 120 languages, most people speak up to 5 each! Lake Chad is now far smaller and shrinking because of climate change. Burundi’s drums are made from a tree that grows nowhere else, called “umuvugangoma”. There are more than 600 species of butterflies in the Central African Republic. They also have strong magnetic fields underground that makes needles in compasses go haywire. Democratic Republic of the Congo has huge mines of cassette and coltan, used to make mobile phones and handheld devices.

North Africa consists of Algeria, Egypt, Libya, Mauritania, Morocco, Tunisia, and Western Sahara. The whole of North Africa is a desert called the Sahara. Morocco is the most northerly and it used to be a part of Europe before it was conquered by North Africa. Morocco has factories where they make cars like Peugeot, Citroen and Renault. Algeria is the largest country in Africa, and they will soon have the largest solar energy farms in the world. Egypt is on Africa and Asia, and it is probably the best-known African country. Egypt has the best army in Africa. One of the oldest Jewish communities in the world was in Libya, dating back to 300BCE. Mauritania still has slavery, where people are bought and sold like animals! Western Sahara is the only place where a film festival takes place in a refugee camp! Moroccan government took over Western Sahara in 1975.

I think the theme of the book is “keeping traditions alive”

The lessons I picked up from the book:

1. Africa is really really big!
2.      If there’s racism, just keep fighting for equality.
3.      Everybody is originally from Africa.
4.      Nobody lived in the land of Mauritius till 1683
5.      It is good to be kind to the planet and our environment, so that we can stop climate change.
6.      We should not buy things from people who force children to work on farms and mines.
7.      People in Africa believe everything in the world has a soul, even trees, rocks, rivers, and lightening.
8.      African countries have lots of different languages, because they are made up of ancient African kingdoms.

Would I recommend this book to others and why:

How I am feeling:

I am feeling more educated than how I was about Africa.

What I enjoyed in the challenge:

I have liked all this studying, when I sometimes usually want to be lazy.